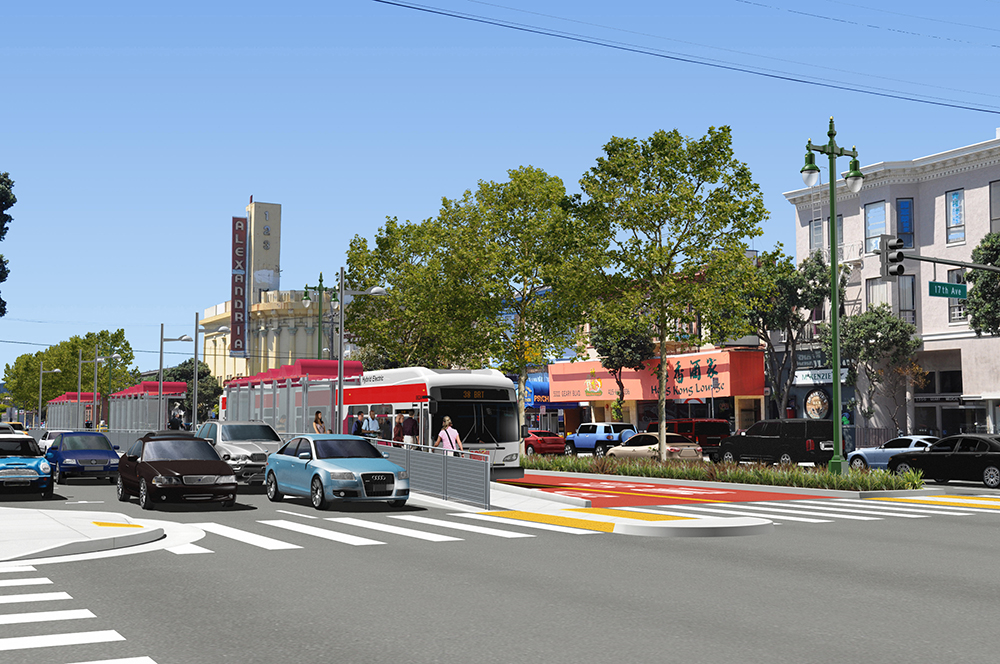 If you live anywhere along or near the Geary corridor you are probably aware of the controversial Geary Bus Rapid Transit (BRT) plan that has been underway for years.

The plan would extend the dedicated red lanes from Market all the way down Geary to 48th Avenue, which experts say would cut travel times by 20-24%. Additionally, sidewalks would be expanded in some areas, Geary would be repaved, pedestrian bulbs would be added to crosswalks to create safer crossing along Geary, and updates would be made to the traffic stops to prioritize the buses. Basically: faster, better, and safer travel for pedestrians and bus riders. Considering the 38 is the most heavily used bus line west of the Mississippi, with an estimated 52,000 riders a DAY, you might think this sounds too good to be true.

Some people wouldn’t agree with that, and the most vocal are members of a group called the San Franciscans for Sensible Transit (SFST)

SFST claims that the BRT will do more harm than good, suggesting that the two year construction and closure of lanes will cause traffic that will hurt business, the additional red lanes will hurt business, and that the 38R is already already effective at delivering passengers, etc. etc. etc. Their recommendation? Sidewalk bulbs, upgraded traffic lights, and repaving as an alternative. Basically they’re going to take the filling out of the burrito that is the Geary BRT.

So what did the SFST do when the Supervisors approved the project earlier this year? They sued and now the project is on hold, leaving the future of Geary’s public transit up in the air.

Are the concerns of the SFST fair? I would say to some extent, but I think they’re missing quite a few points:

I wouldn’t exactly say this is a no-brainer, but if public transit is faster and more accessible and if sidewalks are expanded with safer street crossing it will naturally create more foot traffic.

The businesses on Geary are genuinely concerned around street closures and car traffic during construction and after the the project is finished;that’s important to acknowledge. However, most of the businesses on Geary are restaurants, corner stores, and retail stores who will greatly benefit from increased foot traffic. Sure, there’ll be a smaller amount of parking, but that’s small fries compared to the number of folks peeking through your window as they walk to their new bus system.

The Geary Bus Rapid Transit will help lower-income San Franciscans and the elderly.

This is a simple fact. Public transit is used at higher rates by people living on lower-incomes and the elderly.

That’s a lot of numbers, but it’s important we acknowledge that many of the most vulnerable San Franciscans would benefit from the BRT. We would be doing these folks a disservice by denying them better, more reliable transit to take them to and from work and important medical and care services.

This blog is not just about housing, it’s about building housing and communities in a way that benefits everyone. But we cannot grow communities and neighborhoods without comprehensive public transit.

The biggest problem with this lawsuit is that it is denying transit expansion in fear of increased car traffic, but this is not the way we can approach transit in San Francisco. We simply have to prioritize public transit, both to help the city take in its growing population of all income levels and to help keep our air cleaner and help fight climate change.

And all of that aside, the Geary BRT could potentially pave the way for light rail as the dedicated lanes could easily become rail service once the funding for such a project becomes available.

And if the SFST wanted to crack down on traffic they should be focusing on Uber and Lyft who are responsible for an estimated 45,000 cars on our streets. Surely that is a bigger issue than designating lanes for faster public transit?

Unless the SFST decides to drop its lawsuit (which is very unlikely) or the city is able to win its lawsuit (and goodness knows how long that will take) we’re unlikely to see much movement towards improved transit along Geary Boulevard. So please try and put some deodorant on before sardining in with the rest of us next time you take the 38.

"A city is where you can sign a petition, boo the chief justice, fish off a pier, gape at a hippopotamus, buy a flower at the corner, or get a good hamburger or a bad girl at 4 a.m. San Francisco is such a city." - Herb Caen https://fogtownblog.com/2017/03/30/introducing-fogtown-blog/